Qadri arrives at Jinnah Hospital to inquire about workers' health

Qadri arrives at Jinnah Hospital to inquire about workers' health 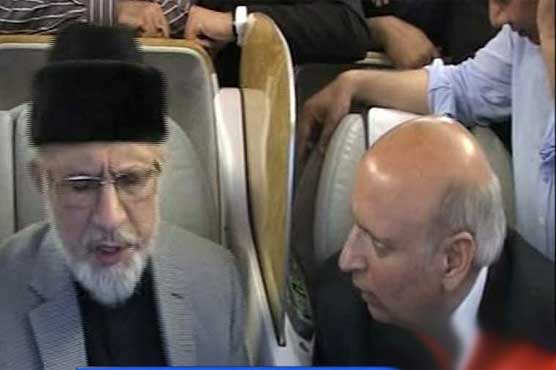 A large number of the workers including women thronged the hospital to greet their party chief.

A large number of party workers including women were present in the premises of Jinnah Hospital and surrounded the party chief to welcome him.

Earlier, Tahirul Qadri disembarked from the plane at Lahore airport after he conditionally agreed that Punjab Governor Chaudhry Muhammad Sarwar should accompany him to Jinnah Hospital and then his party secretariat at Model Town.

Tahirul Qadri said he agreed to come out of the plane because he considers Chaudhry Sarwar as his brother and not as representative of the government.

After arrival of Chaudhry Pervez Ilahi at Lahore airport, Tahirul Qadri, along with the Punjab Governor and the PML-Q leader left for Jinnah Hospital.

Qadri had set condition to the government that he will only exit the plane if Governor Punjab Chaudhry Sarwar accompanies him to his Model Town residence.

Police officials were appointed at the route to Jinnah Hospital and Model Town while CCPO Zulfiqar Hamid also accompanied the convoy of Dr Tahirul Qadri.

On Monday (today) morning, the federal government diverted Qasri’s plane to Lahore where he refused to get off until army assures his security.

The PAT chief later conditionally agreed and demanded that Punjab governor should accompany him to Model Town.