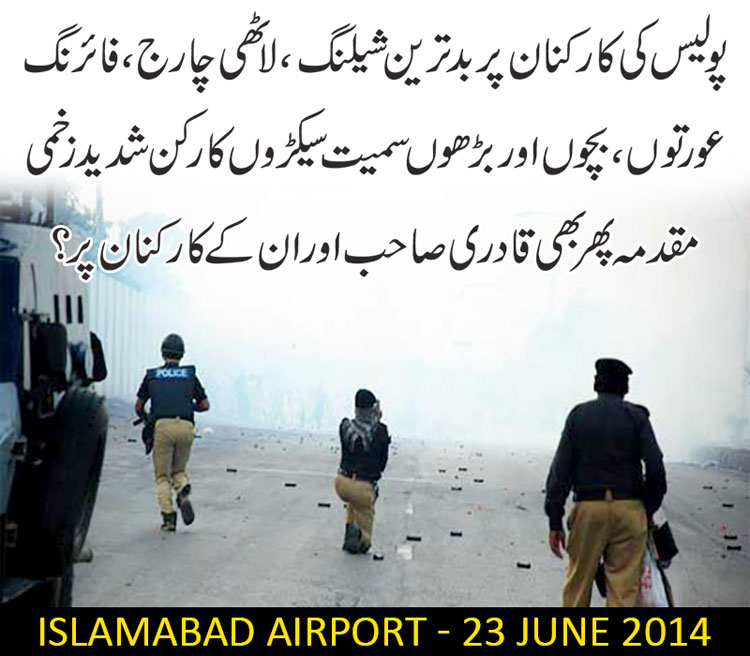 Pakistan’s 24/7 electronic media showed the conduct of the rulers at the time of PAT chief Dr Muhammad Tahir-ul-Qadri’s arrival in Pakistan. The hundreds of thousands of people from across the country left for Islamabad to welcome their beloved leader who was schedule to land at 8:30 a.m. on June 23, 2014. Some of the caravans had started for the capital a day before to be able to reach there on time. However, despite the incident of Model Town in which 14 precious lives were lost as a result of state terrorism, the government did not learn any lesson and chose to mete out the same treatment to the PAT workers that they demonstrated a week ago in total disregard for morality and law. It again made an attempt to crush the voice of people through the use of force. It employed different tactics to thwart the reception of Dr Qadri. It resorted to mass arrests of workers besides placing containers and barricades in various cities. Islamabad and Rawalpindi were sealed off. Heavy police continents were deployed across the province and Clause 144 was imposed.

While the workers were on their way to Islamabad on the night of June 22, their caravans were stopped at different places and those belonging to cities located along Grand Trunk Road were made to stay in their respective cities. The local administrations blocked link roads of motorway and GT Road. Baton-charging, teargas and braving torture, they still managed to reach Islamabad/Rawalpindi by crossing all hurdles, arrests and crackdowns. Police broke all records of brutality and barbarism on the unarmed workers on the illegal orders of rulers but patience, courage and emotions of workers defeated all the oppression.

Dr Tahir-ul-Qadri was on his way to Pakistan from Canada via London, Dubai to Islamabad for last three days. Every coming moment appeared to be last moment of the rulers in Islamabad. It was merely the arrival of Dr Qadri which had unnerved them and the call for revolution had not yet been given then. It was merely the grand reception which became a thorn in the eyes of the government ministers who were fuming at their mouths. They did not know what to do to stop the sea of people. They would either use coercive force to browbeat people into submission or employ other tactics but to no avail.

At long last, the aircraft carrying Dr Tahir-ul-Qadri established its contact with the control tower at 8:30 am. The rulers’ nervousness, lack of confidence and uncertainty can be gauged from the fact that the aircraft completed eight circles of the airport but it was not allowed to land. The airport authorities ordered the plane to be taken to Lahore. It was nothing less than hijacking of an international aircraft which was asked to change its direction without any technical reason.

The moment Emirates aircraft was diverted to Lahore in violation of all laws governing air traffic, the whole nation termed this government’s action as high-handed, brazen and condemnable in a single voice. This step of the government exposed its nervousness and stupidity not only to the people of Pakistan but also the whole world. Upon hearing the news of flight’s diversion, thousands of people from Lahore and adjoining areas headed for the Allama Iqbal International Airport and within a short span of time, the airport echoed with slogans in favour of the PAT chief.

Dr Tahir-ul-Qadri refused to leave the aircraft as a mark of his protest against the government’s high-handedness, oppression and terrorism. Dozens of representatives of national and international media and NGOs were with Dr Qadri travelling with him from London and Dubai to Pakistan. They also described the government’s action as violation of international laws and said that stopping the citizen of a country from coming to his homeland was not justifiable under any pretext. The PAT chief remained in the aircraft for five hours. He, at last, decided to disembark lest the government should perpetrate more terrorism on the people. He accepted his personal friend, Chaudhry Muhammad Sarwar’s request, which was made at a personal level and came out of the aircraft. He expressed his no confidence in the government’s security. The first destination of Dr Tahir-ul-Qadri straight from the airport was Jinnah hospital where he inquired after the health of his under-treatment workers who had been injured by bullets of police in Model Town on June 17. From hospital, he came to the central secretariat where thousands of workers including men and women received him warmly.

“First of all, I express my gratitude to Allah Almighty with Whose help and blessings I have been able to be among my workers and people despite the worst ever terrorism perpetrated by today’s Hitler and Mussolini and hijacking of plane. The future of 180 million people has been made dark. I have stepped into the arena to change the destiny of every segment of this country. The PAT workers have laid down the foundation of revolution with their blood. It is now turn of the people to come out of their homes and play their due role. Time is not far away. Revolution is now knocking at the doors. Soon the people will send this government home. These rulers will be in jails and every penny they have spent from public exchequer will be audited and accounted for. There would be such stringent accountability as has not been witnessed in last 65 years in the country’s history. He said that revolution will be followed by change in the system and I would hold fair, free and transparent elections myself.

“I ask the rulers to commit as much oppression today as they can face tomorrow. Despite all terrorism and hurdles of the government, I am present among my workers. I pay my homage to those who have offered the ultimate sacrifices of their lives on the intervening night between June 16 and 17. The courage with which electronic media showed the truth live on their TV screens, I also pay them my rich tributes and pray for their well being. I am going to give a call of revolution soon. The rulers have already become nervous due to my arrival and my final call will prove to be the last push in the coffin of this corrupt, obsolete system and this tyrannical reign of family dynasty will end soon.”

Dr Tahir-ul-Qadri announced ‘Shaheed e Inqilab Award’ and life-time financial assistance for the heirs of the martyrs. The brutality and barbarism displayed by the rulers on the occasion of Dr Tahir-ul-Qadri’s arrival drew widespread condemnation from all mainstream religious and political parties, civil society organizations, and human rights activists. Taking a strong exception to the government’s step to order diversion of flight from Islamabad to Lahore, they said that the government is making things messier due to its devious tactics. He said that it has people from within its ranks that are bent on harming the government by suggesting such steps. The government is making one mistake after the other. Dr Tahir-ul-Qadri’s arrival back home is his democratic legal and democratic right and the government has done the undemocratic thing by diverting the flight and torturing PAT workers going to the airport for reception of their leader. If a Prime Minister, who enjoys two/third majority, is afraid of reception of one leader, then God have mercy on Pakistan. The country suffers from leadership crisis. The issue has gone global because an international flight was diverted.

The government is well advised to come back to its senses and stop vindictive activities against PAT. Nawaz Sharif has repeated history of 1999 and the time is not far when the ship of this government will be caught up in unchartered waters. Vindictive actions of the government against Dr Tahir-ul-Qadri are glaring proof of the government being nervous and out of its mind. The PML-N government is using police as its personal servant against its political opponents. Had the aircraft been allowed to land in Islamabad, nothing untoward would have happened there and it would not have been a big deal. The government in fact hijacked the plane of an international airliner. The current Prime Minister is quite expert in the art of flight diversions. Those who ordered flight diversion should be proceeded against under the law. The fact that thousands of workers were able to reach Islamabad despite the government’s crackdown, arrests and hurdles is latter’s defeat. The arrival of Dr Tahir-ul-Qadri in Pakistan has accelerated the struggle for revolution and the government has shown its dictatorial mindset by creating hurdles in the way of reception of the PAT chief.

It is given that devious tactics employed by the present rulers will fail ultimately. The people have woken up for revolution and they are ready to sacrifice anything for the bright future of their children. Revolution is their final destination which is sure to happen under the leadership of Dr Tahir-ul-Qadri. Whatever the beneficiaries of the system do to stop this mass awareness, this caravan is unstoppable now. The superstructure standing on the foundation of corruption, oppression, and violation of human rights will come crashing today or tomorrow. The system will be changed and people will get their rights back. 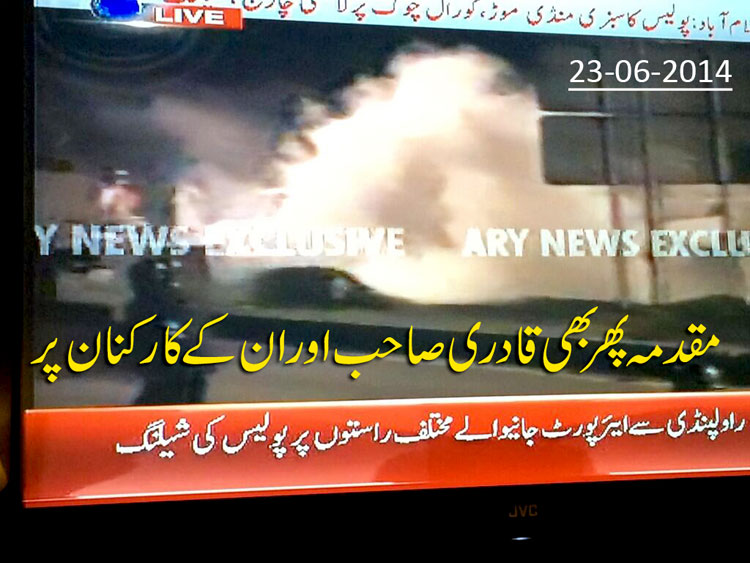 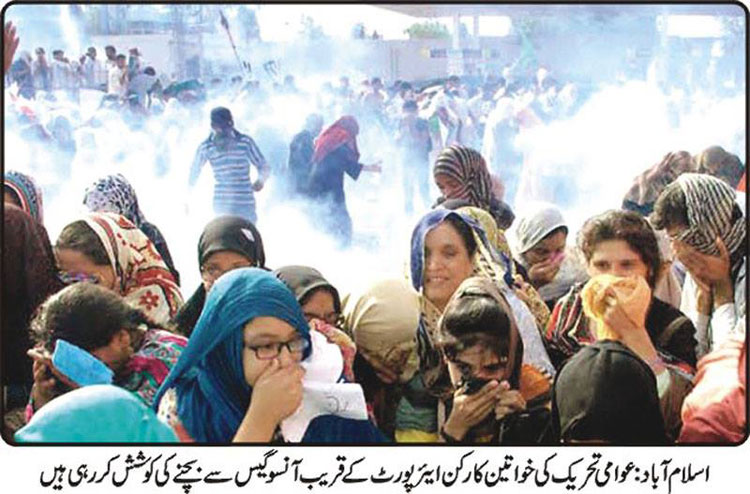 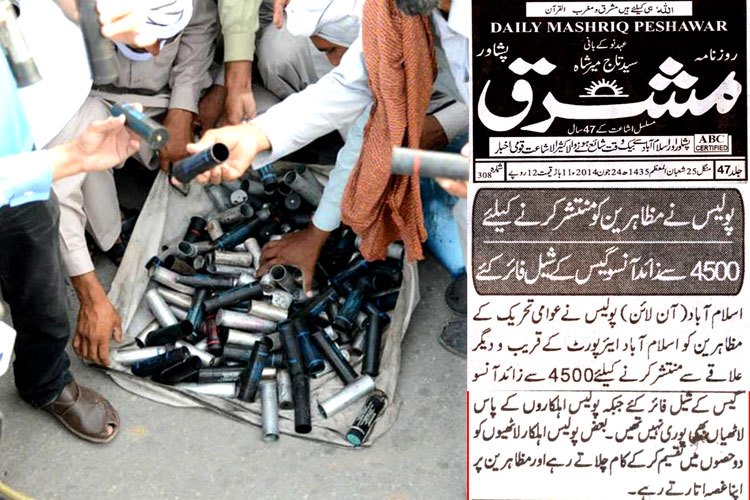 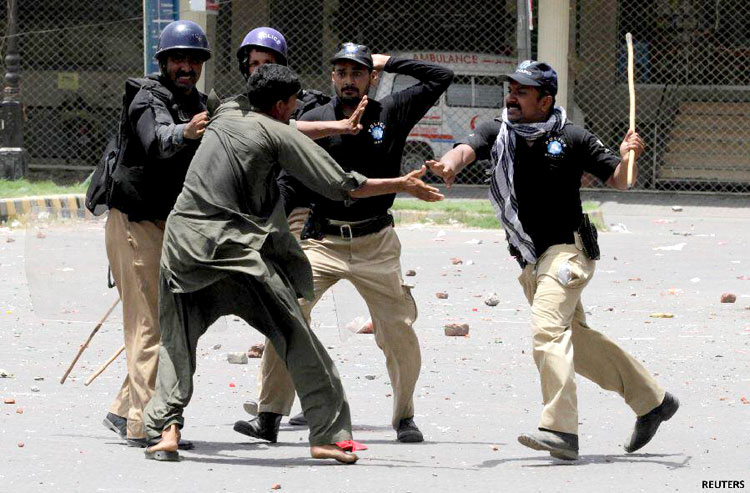 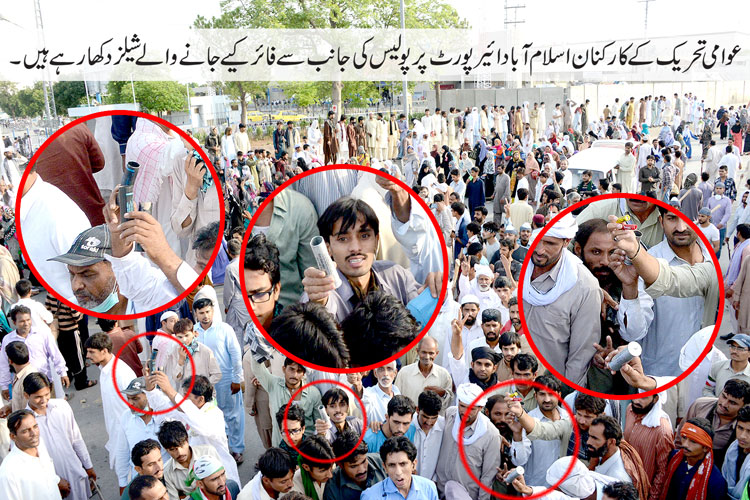 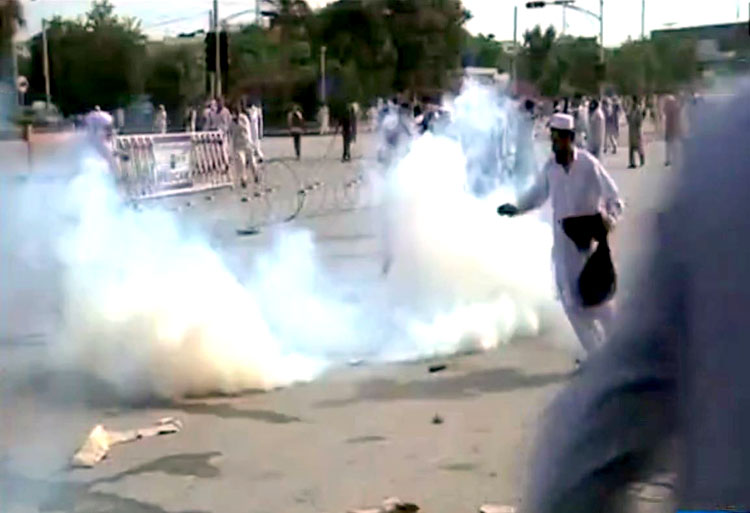 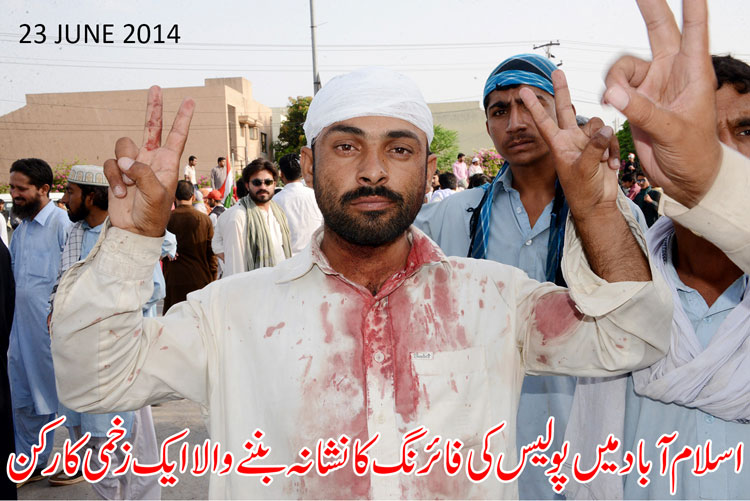 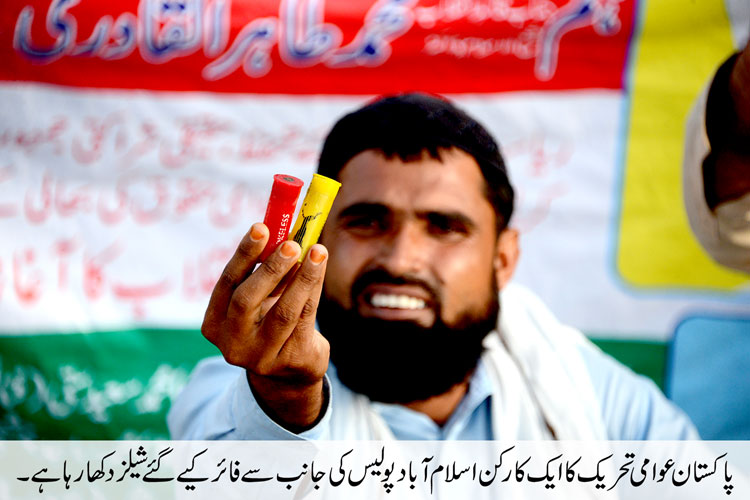 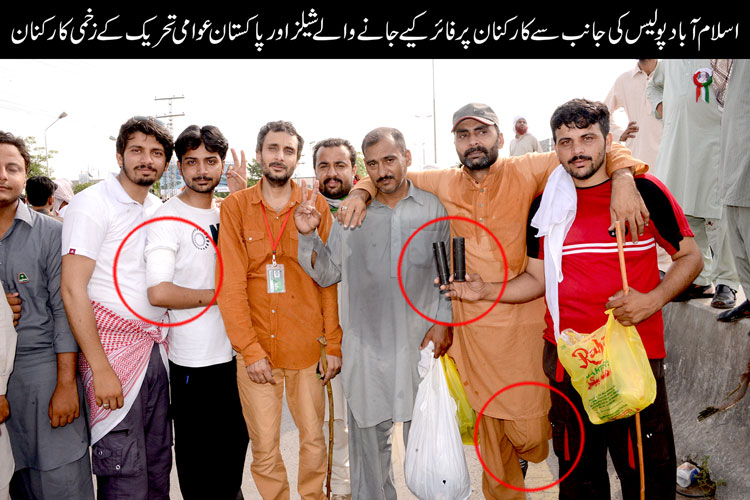 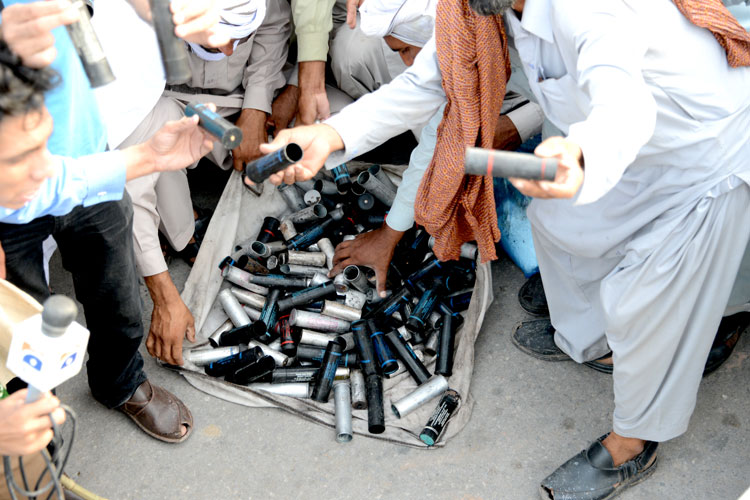 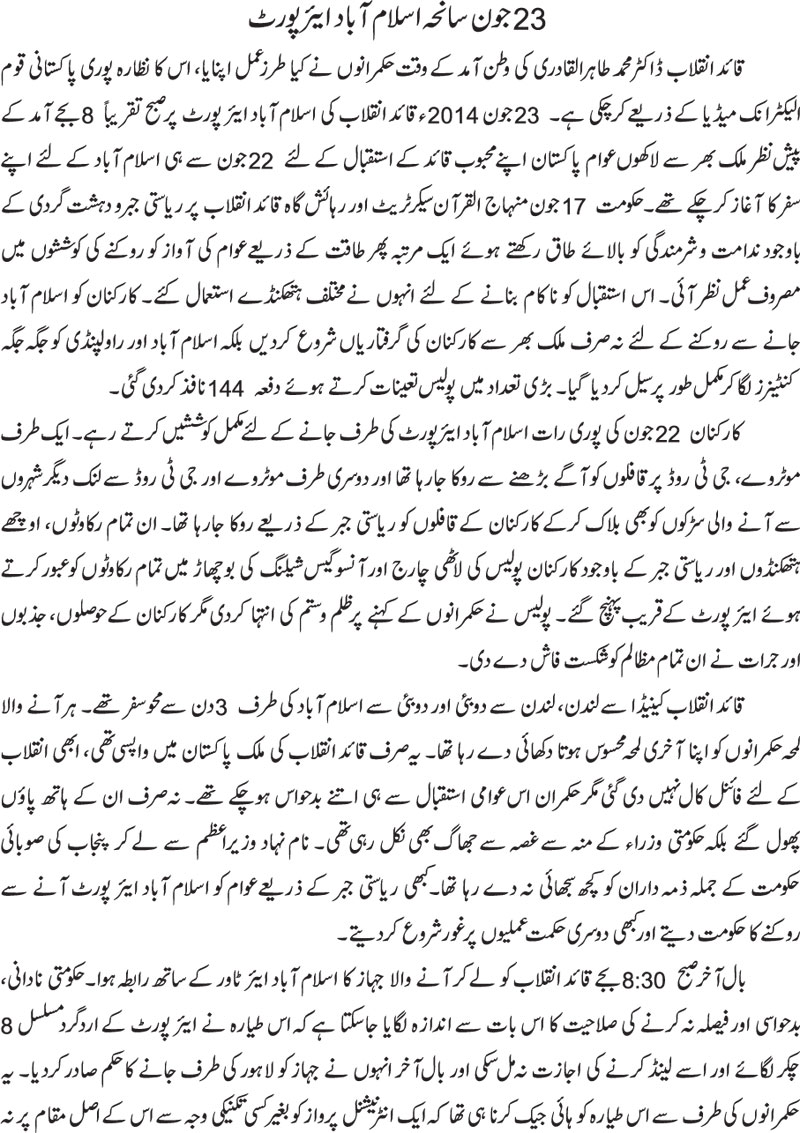 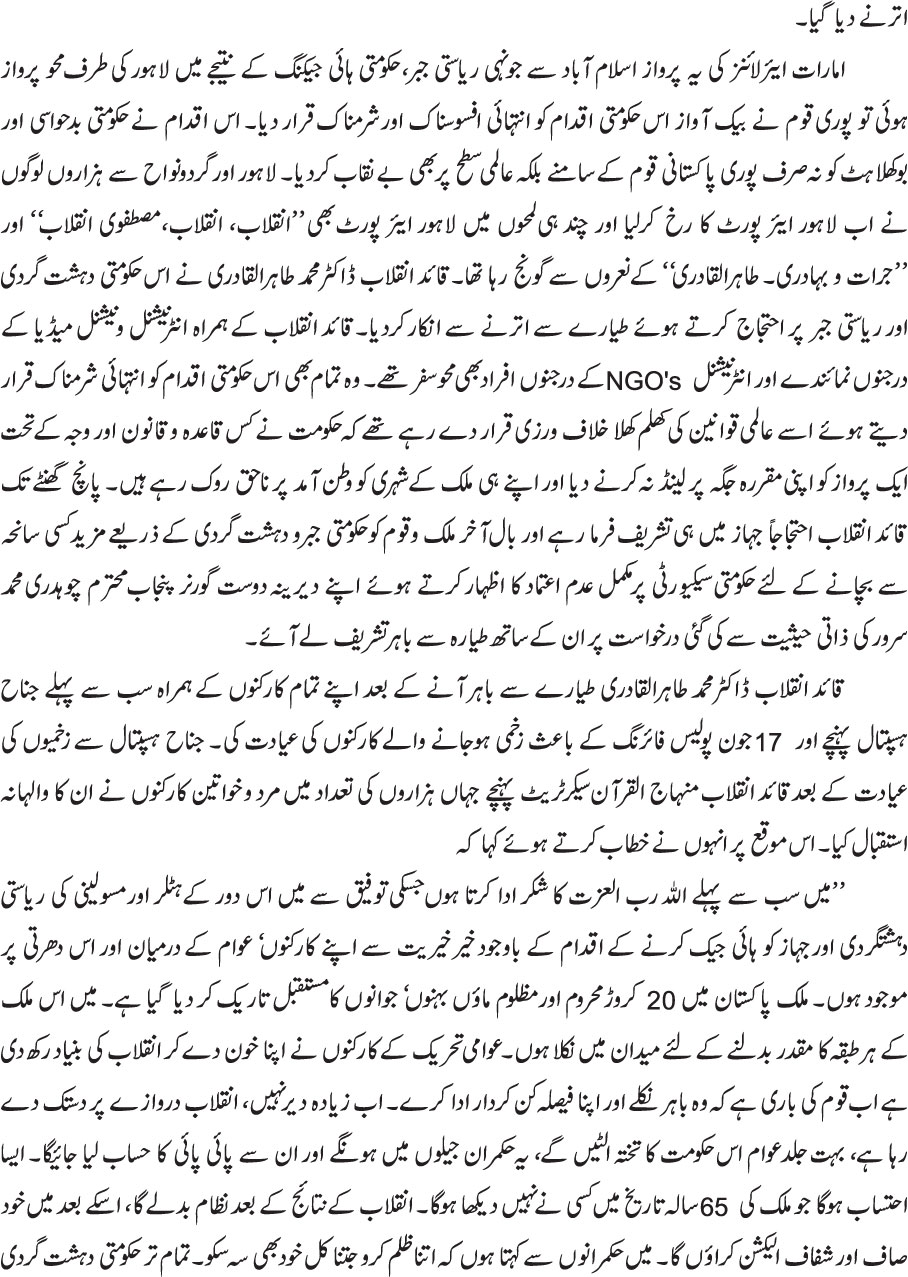 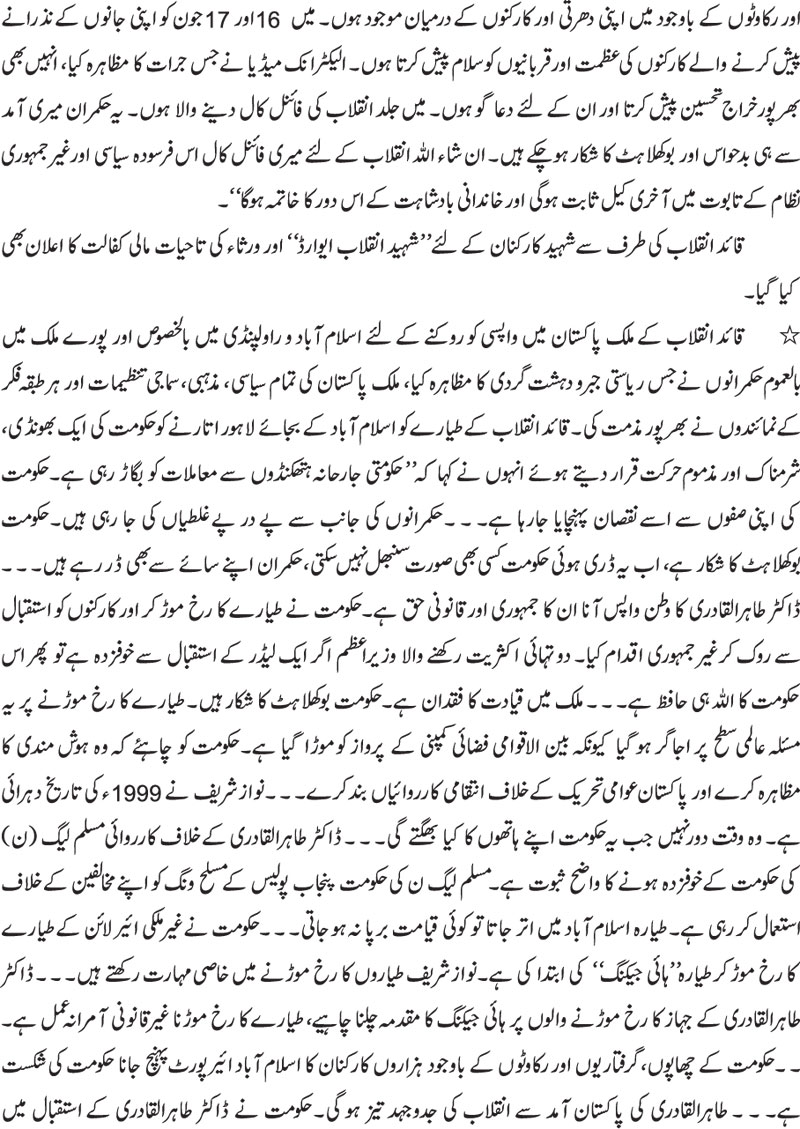