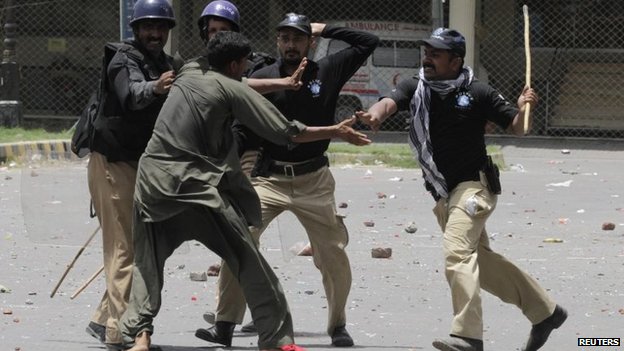 Minhaj-ul-Quran USA vehemently condemned the worst incident in the history of the Pakistan of brutal killings of innocent unarmed citizens including women, children and elderly at Minhaj-ul-Quran Secretariat Lahore on Monday, June 17, 2014.

Minhaj-ul-Qur’an International (MQI) is an organization with branches and centers in more than 90 countries around the globe, working for the promotion of peace and harmony between communities and the revival of spiritual endeavor based on the true teachings of Islam. Its Main Secretariat is in Lahore, Model Town where the innocent citizens of Pakistan were fired upon by the Punjab Police for resisting the removal of legally authorized barriers that were set 4 years ago, upon the orders of the High Court of Pakistan, for security reasons. The barriers were erected at the Secretariat and at the residence of the founder of Minhaj-ul-Quran International, Shaykh-ul-Islam Dr. Muhammad Tahir-ul Qadri, in the Model Town Extension area.

Instead of holding talks with the PAT leadership in daylight, the coward police, the state terrorists, chose to launch an attack on after midnight and sprayed a volley of tear-gas shells at the unarmed PAT workers without realizing that it was a residential area where elderly citizens, women and children also lived. Many families had to leave their tear-gas-filled houses in haphazard manners. Police blindly fired tear-gas shells of which some landed on locals’ residences. The local residents reported that the Lahore police action was barbaric and inhuman.

The Pakistan Muslim League (PML) president Senator Ch. Shuja’at Hussain said if Dr Tahir-ul-Qadri wanted he could have put the whole country on fire after the Lahore incident, but he had shown great patience and tolerance and advised the protestors to remain peaceful.

In a statement issued on Wednesday, June 18, 2014 in International, The News, Ch Shuja’at said his party would support Dr Tahir-ul-Qadri in his mission as he was working with good intentions for revolutionary reforms.

The PML-Q chief said the barriers were set up at Dr Tahir-ul- Qadri’s residence on the orders of the High Court and removing the barriers was a cowardly act of the Punjab government. He termed the chief executive of the province responsible for the blood of those martyred in the police action.

The Pakistan Tehreek-e-Insaaf leader Imran Khan said that Punjab Police is a wing of PMLN and demanded the immediate resignation of the Chief Minister, Mr. Shahbaz Shareef.

Pakistan Peoples Party-Punjab has strongly condemned the killings of people including women in police action at Minhaj-ul-Quran Secretariat and termed it an act which has also damaged the cause of national unity at a critical time when the country is facing challenges from the outside.

The government, gripped by fear of Dr. Tahir-ul-Qadri’s arrival, harassed young workers who made the corrupt attempts unsuccessful regardless of their high-tech machinery including tanks and bulldozers. A total of 14 people received martyrdom with another 90 seriously injured. The first time in the history, over 200 people have been shot with bullets, in one event, by the State terrorists. These State terrorists killed 14 innocents (number increasing every day) and now the government is trying to pay for their blood which was refused blatantly by the families of martyrs. According to the reports of media and injured citizens, Punjab Chief Minister made some police officers as officers on special duties (OSDs) who were enforcing the hospital administrations to fabricate reports of the injured and martyred. The injured are not getting necessary treatment. Instead of removing the bullets from the injured, the wounds were covered only with bandages. More than hundreds of PAT workers have been kidnapped by brutal Punjab Police and no one knows where they have been kept. Dead bodies of the victims were not handed over to the family and the police were disappearing them. The hospital received innocent captives who were tortured seriously by the police. The innocent captives had nails hammered on their body while they were imprisoned by the police.

Dr Muhammad Tahir-ul-Qadri is a globally recognized authority on the law and spirit of Islam. He is a paragon of love, peace and harmony and every word uttered by him is a fountain of love and peace. He is no doubt fulfilling a great responsibility of reconstructing and reforming the Ummah of the Holy Prophet (blessings and peace be upon him) in accordance with the demands of the modern times. Dr Muhammad Tahir-ul-Qadri is playing the role of a bridge between the world of Islam and the West. Dr Tahir-ul-Qadri has the support of the entire nation in his efforts to reconstruct a peaceful society. Dr. Qadri released the Fatwa on Terrorism and Suicide bombing on 2 March 2012. It is one of the most extensive Islamic anti-terrorism rulings, an “absolute” condemnation of terrorism without “any excuses or pretexts” 512-page (English version) Islamic fatwa is a significant blow to terrorist recruiting.

The entire world is appreciative of the scholarly services of Dr Tahir-ul-Qadri and rightfully acknowledges the role played by him for promotion of peace and harmony in the world.

Knowing the facts about the scholarly work of Shaykh-ul-Islam on peace and harmony and that he carries the title of the Ambassador of Peace, Dr. Muhammad Tahir-ul-Qadri was falsely accused of having the stored weapons at the MQI’s headquarters. If there were weapons inside MQI secretariat, why did the police not show them to the media? MQI secretariat had legally authorized armed guards who could have fired, but due to the orders of Dr. Qadri, they even remained peaceful. The media broadcasted the police brutality and massacre of innocent citizen’s lives over 14 hours but didn’t show any weapons in the hands of unarmed PAT workers. Why? Because there was none, and the government lied.

Why was Dr. Qadri’s house shot at, were there any barriers inside his house? The media is the biggest evidence, who were present and witnessed this massacre unleashed by the Punjab Police. Many TV channels including ARY, SAMA TV, DUNYIA TV, Express News Channel, C42 and other TV channels have shown live coverage of how State Terrorism took place by the hands of police officers. If media had not been there on time, who would have delivered the true picture of the attacks? The nation has witnessed and knows the truth about how PAT/MQI workers were attacked for no reason. The media visited the MQI secretariat, Gosha-e-Durood (where recitation of durood shareef continues 24 hrs.) and the residence of Dr. Qadri and witnessed the proofs of the bullet shootings at the walls, family rooms and ceiling and broken generators. How does this link with the barriers? Why did they fire at the residence? It was a clear attack of assassination of Dr.Qadri’s family.

The chief and founder of Pakistani Awami Tehrik, Dr. Muhammad Tahir-ul-Qadri while addressing to a press conference held on Wednesday, June 18, 2014, said that this terrorism has been done by the PMLN government to scare people from standing up for their rights. He further said that the purpose of this state terrorism was to create unrest within the nation to distract the attention from Pak Army’s Zarb-e-Azb operation in Waziristan. The other purpose of this state terrorism was to revenge his support for ISI and Pak Army. These barbaric leaders wanted to show that they can do the worst terrorism. The oppressive step taken by the government would pave the way for promotion of terrorism.

Dr. Qadri said that legal cases cannot be decided impartially. After revolution, justice will reign supreme and the law of retaliation (qisas) about the Model Town tragedy will take its course. He elucidated that time to put an end to oppression, terrorism & savagery of corrupt rulers has come.

PTI, PML-Q, MQM, PPP - All major parties have rejected the Judicial Commission set up by the government and the FIR submitted by them which is constituted by the terrorists and killers. Dr. Qadri thanked all political parties who have shown their solidarity with him and walked out of the assembly. He also thanked the electronic and print media for their support in this horrific time. The workers’ martyrdom will bring the end of these rulers. He concluded by saying that his workers will never be defeated and his workers will stay steadfast. There has never been any legal action taken against the workers in the past 33 years of the history of MQI. Dr. Qadri paid his salutations to the workers who did not fire even a single round of ammunition, they only used rocks to defend.