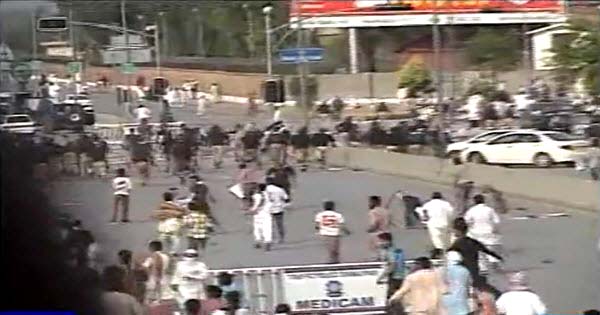 With the PAT announcement to observe Martyrs Day on August 10, 2014, the government became so nervous that it started harassing and intimidating the workers. The thousands of workers were arrested in countrywide crackdown with an express aim to stop them from attending the central Martyrs Day ceremony in Lahore. The whole of Punjab was turned into a jail and the Model Town of Lahore where PAT headquarters are located was made Gaza by laying a siege to the area. Movement of the people including food supplies was stopped and heavy contingents of police were deputed at entry points of Model Town.

Punjab police playing the role of a personal servant of the rulers committed worst repression on the caravans of people coming from Kamoke, Bhakkar, Gujranwala, Faisalabad, Okara, Bhera and South Punjab. The people were forced to come out of their buses, baton-charged, and tear-gased, so much so that police goons did not hesitate to fire live bullets at the protesters. As a result of this incident, three workers were martyred and around a thousand of them were injured. The unarmed workers and people offered themselves before the police bullets. The police even did not bother about respect of the women. They forcibly entered into workers’ houses and manhandled close relatives including the elderly, women and even children.

Talking to media, PAT leader Dr Muhammad Tahir-ul-Qadri condemned police brutalities and said that this is the height of oppression perpetrated by the Punjab government. He said that Punjab Police is dishonouring the elderly and women by gate crashing into homes of workers in the worst ever disregard of fundamental human rights. He said that the police is also conducting raids on the houses of owners of private security companies whose guards we had hired for security purpose. He said that the whole of Punjab has been turned into Gaza, adding that the killer police have riddled the bodies of his workers with bullets and they are not being allowed to be shifted to the hospitals. He said that the live bullets were fired at the workers at the Bhera Interchange, adding that the Punjab government has crossed all limits of shamelessness. He said that their plan is to kill as many people as possible so that panic should be spread across the province so that people could not stand up for their rights.

Dr Qadri further said that he never witnessed incident of oppression of such proportions in his entire life. He asked the nation to stand up for their rights. He said that the rulers tore Articles 9, 15 and 16 into shreds and suspended fundamental rights enshrined in the Constitution. It is for this reason that the rulers should be proceeded against under Article 6 of the Constitution. He said that trenches were dug on various roads of Punjab and thousands of buses coming from the whole province have been commandeered. He said that all main roads were blocked through placement of containers. He further said that these rulers are enemies of the people, adding why the state institutions do not take notice of these excesses. He said that the Sharif brothers provided sanctuaries and funding to terrorists and now had resorted to victimization of the masses. He said that trenches are always dug for the enemies. He said that power-drunk rulers have deprived the nation of right to travel and have turned Model Town into Jallianwala Bagh through state terrorism.

When the police brutality on the workers crossed all limits and thousands of workers coming to attend the Martyrs Day ceremony were stopped, harassed and arrested, Dr Tahir-ul-Qadri directed them to stop where they were. He asked them to stage peaceful sit-ins at place where they had been stopped and offer Fateha and prayers for the Model Town martyrs. He further instructed the workers to hold peaceful demonstrations in their cities and expose the fascist face of the government to the whole world.

Following these instructions, the caravans stopped where they had reached and the Quran-Khawani started on the roads. Dr Qadri addressed the central ceremony on December 10 and said that we are waging a peaceful struggle for the rights of 180 people. He said that despite the fact that cruel rulers have left no stone unturned to perpetrate terrorism on the workers, we would still not let go of patience, law and peacefulness. He said that we do not want to take some illegal, undemocratic step, adding that protesting against oppression is right of every citizen. He said that it is Divine Commandment to expose the oppressors when they oppress people. He said that exposing this system is the duty of every citizen.