PAT chief Dr Muhammad Tahir-ul-Qadri has made it clear that unless foreign funding is banned, it will not be possible to eliminate terrorism. He said that foreign funding to seminaries reflects criminal negligence of successive governments that failed to discharge their responsibility for reasons of expediency and narrow interests. He said that all governments of past are equally responsible for mushroom growth of extremism and radicalism in the country.

Dr Tahir-ul-Qadri made these remarks while talking to renowned anchorperson Mubasher Luqman in his ARY News’ programme ‘Khara Sach’ on Wednesday night. He said that those who do not allow taking up of arms and invocation to verses of Jihad in their own country want to promote violence and mischief in Pakistan in the name of Jihad. He said that Pakistan has not been a moderate society anymore due to uninterrupted supply of foreign funding and foreign ideology, adding that the Quaid-e-Azam's ideals are being torn asunder today as extremism and militancy are direct opposite of what the great Quaid stood for.

The foreign funding is provided to the religious institutions where radicalism and extremism is promoted. #WeWantPeacefulPakistan

Dr Qadri demanded that all political parties taking foreign funding should also be audited and those not getting audited should be banned. He said that the foreign funding to seminaries is not meant for education or charity. Rather it is done for fulfillment of so-called Jihadi objectives. He said that the thousands of religious seminaries are not registered. A seminary, school or university that resists audit should be locked.

The PAT chief said that he asked Gen. Zia-ul-Hq and Ghulam Ishaq Khan to order banning of foreign funding. Under what clause of Constitution does it take place? He said that in an environment when no one dared talk against terrorism in Pakistan, he gave historic 600-page Fatwa against terrorism and suicide bombing. He said that Pakistan Army and PAT are waging an open battle against terrorism. This is our own national war.

Rulers can perpetrate oppression but cannot scare #DrQadri & his workers. We stand firm on our mission. #WeWantPeacefulPakistan

The PAT leader said that the rulers can go to any limit to perpetrate oppression but they cannot scare Dr Qadri and his workers. He said that we stand firm on our mission. He said that Model Town tragedy in which 14 innocents were martyred was done because we raised effective voice against terrorism. He said that Dr Touqeer Shah, central character in Model Town tragedy, is being appointed as ambassador in WTO so that he could not become approver. He said that we reject JIT of killers. We demand impartial JIT that should expose the real killers.

Dr Qadri asked if Punjab government is not responsible for Model Town tragedy, it should make report of tribunal public, saying why has it got a stay from the court? He said that Shahbaz Sharif had said that if tribunal held him and Punjab police responsible for Model Town killings, he will resign from his position. He said that as long as corrupt rulers occupy this country, the scourge of terrorism cannot be eliminated till that time. He said that the rulers, who are supporters of terrorist organizations, will try to throw spanners in works of military courts and political drama will be enacted.

He said that Qisas will be taken for blood of Model Town martyrs. We will continue to wage peaceful struggle till we get justice. The rulers have made nation insensitive. People pray for revolution at homes but do not come out to protest Peshawar tragedy, he added.

Qisas will be taken for blood of Model Town martyrs. We will continue to wage peaceful struggle till we get justice. #WeWantPeacefulPakistan 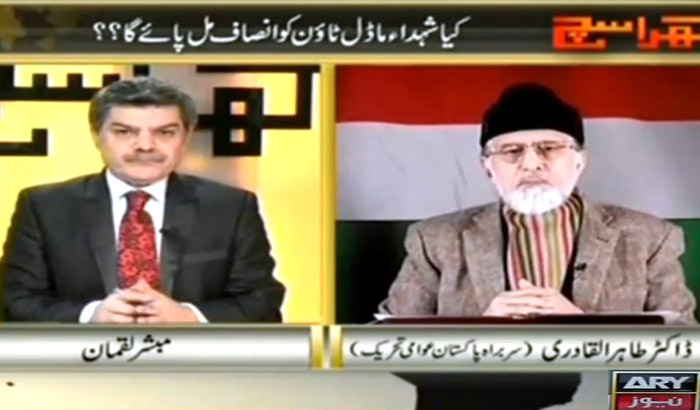