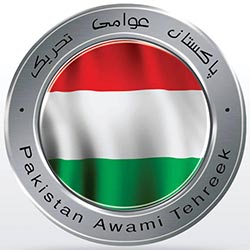 The PAT has dispatched a letter bearing 10,000 signatures to World Trade Organization. Thousands of people belonging to civil society, family members of martyrs, PAT, and MQI have put their signature on the petition. The contents of the letter say that Dr Toquir Shah is a central character in the killing of innocent people and the WTO management has been asked to remove him from his position on this count.

According to the PAT spokesperson, the letter has been sent on behalf of Dr Raheeq Ahmad Abbasi. According to the spokesperson, the judicial commission established to probe Model Town incident had summoned Dr Shah for questioning and the statement given to the commission by the Punjab Chief Minister establishes a strong connection of Dr Toquir Shah with the heart-rending incident because the CM stated in his affidavit that he asked his principal secretary, Dr Toquir Shah, at 9:00 am on the morning of June 17 to order police to withdraw from the Minhaj-ul-Quran Secretariat. The police did not back off and all martyrdoms took place after 11 a.m.