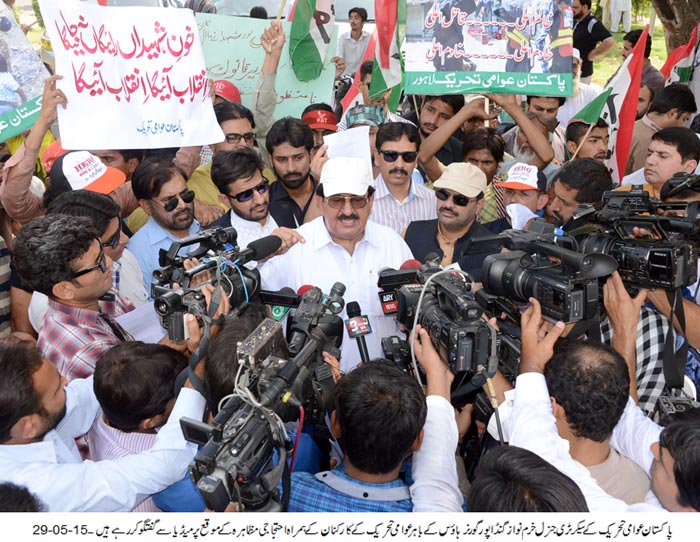 The hundreds of PAT workers marched from China chowk to Governor House, Lahore, to protest induction of Rana Sanaullah, one of the principal accused in Model Town case, into the cabinet of Punjab as the provincial law minister. They raised slogans against the fake JIT report and severely criticized the Punjab government’s decision to reinstate Rana Sanaullah.

Speaking to the media on the occasion, PAT Secretary General Khurram Nawaz Gandapur said that the humanity and law were made fun of by appointing the principal accused in case of Model Town killings as the provincial minister. He said that the reality of the so-called democratic chief minister’s slogans of adherence to rule of law and democracy got exposed badly. He said that the conduct of oath-taking ceremony before the report’s completion is reflective of law of the jungle and a joke with the blood of 14 innocent citizens. He asked, did 14 martyrs and 85 injured people get justice following which a killer was inducted into the cabinet?

Khurram Nawaz Gandapur revealed that the head of the JIT has summoned 42 witnesses to furnish evidence at 10:00 a.m. on the morning of May 30, 2015, whereas today is 29th of May, the day on which the killer of Model Town tragedy has been included in the provincial cabinet. He said that the oath taken by Rana Sanaullah has proven that the step to remove Dr Toquir Shah and Rana Sanaullah from their positions in the wake of Model town tragedy was merely an eye-wash and this drama has fully been exposed today. He said that the report furnished by the JIT does not carry any importance, adding that unless one is declared innocent by a court of law, only then will one be considered as such. He said that oath-taking ceremony of Rana Sanaullah was held in a hurry to push the Daska tragedy under the carpet and teach the lawyers a lesson. He said that the JIT had prepared its report well in advance under the supervision of Rana Sanaullah. 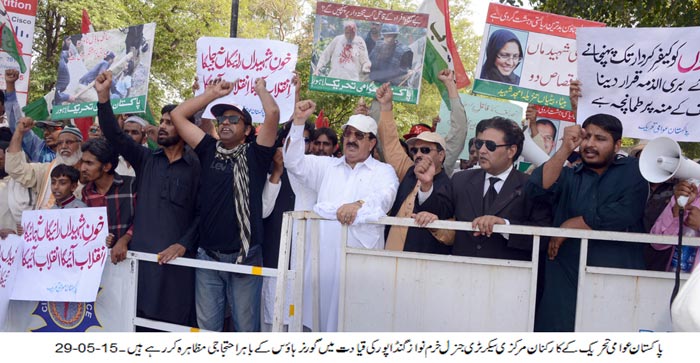 The PAT Secretary General asked the Chief Minister, Rana Sanaullah and the head of JIT to answer how could Rana, the principal killer, was inducted into the cabinet when the investigation into the Model Town killings are still underway? He said that the JIT report does not carry any value in our eyes, adding that the perpetrators of Model Town tragedy were so nervous that they could not ensure the completion of JIT’s proceedings in a proper manner. He said that Abdur Razzaq Cheema played the role of a facilitator of the killers. He asked him to explain as to how much price tag did he place on his services to sell the blood of the innocents? He said that at a time when the so-called proceedings of the JIT did not complete, why did Abdur Razzaq Cheema not reject the statement of Rana Sanaullah regarding completion of the report and declaration of his being innocent? Why did he not clarify that the proceedings are yet underway?

Khurram Nawaz Gandapur said that the JIT is the handmaiden of the government and we fully reject the JIT and condemn its report. He said that we will continue our protest to get justice for our oppressed people and knock at every door for this purpose. He said that protest letters are being written to the human rights organizations, European Union and embassies of the world regarding oppression perpetrated by the rulers in Model Town and violation of human rights. He said that CDs of footage of Model Town incident recorded by the national television networks are also enclosed with the letters.

Jawad Hamid, the complainant of the Model Town case, said while speaking to media that since the day the Sharif brothers have come into power, the humanity and justice are being murdered. He said that they have got acquitted from the Ittefaq Foundry case in the same manner as they did on the pattern of JIT report in Model Town case. He said that protest being staged by PAT will ensure delivery of justice to the poor and the gulf between the haves and have-nots will be bridged.

The copies of the official communication summoning the witnesses on May 30 issued by the head of the JIT were also distributed among the journalists in the demonstration.