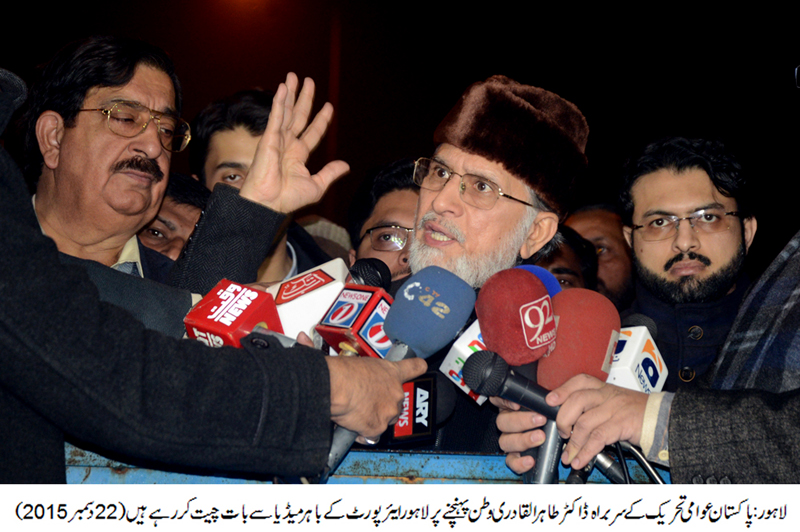 PAT chief Dr Muhammad Tahir-ul-Qadri reached Lahore from Istanbul on the morning of December 22. The central PAT leaders and hundreds of the workers warmly received their leader.

Talking to the media outside the Airport Lounge, Dr Tahir-ul-Qadri said that 14 dead bodies and 100 injured people are waiting for the Army and the Rangers. He asked as to when the action will be taken against perpetrators of Model Town tragedy. He said that Pakistan continues to remain bogged down in the pit of problems and corruption and terrorism are eating into vitals of our polity. He made it absolutely clear that as long as there is one drop of blood in his body, he will keep on demanding justice for the Model Town victims. He said that every report has been published but the report of the Judicial Commission established to probe the Model Town tragedy has not seen light of the day as yet.

Dr Qadri informed the media that 32rd prestigous International Milad Conference will be held at the historic Minar-e-Pakistan under the manner of MQI. He invited the media men to attend the Conference. He said that PAT is waging struggle against terrorism, corruption, injustice and exploitation. He said that our doors are open for everyone. He said whosoever takes one step for the nation’s progress and prosperity, we will take ten steps forward. He said that the country is being run like personal business. He said there is neither rule of law nor justice in the country, adding that provision of education, health and job opportunities is not part of the rulers’ priorities.

Meanwhile, when the PAT Chairman reached his residence in Model Town, he was accorded very warm welcome. The hundreds of female workers threw rose petals on him and chanted welcome slogans on the occasion. Dr Qadri thanked all the workers who came to accord him welcome.

The Patron-in-Chief of MQI, Chairman of PAT Dr. Muhammad Tahir-ul-Qadri arrived back to Pakistan this morning via...