Country not to be defamed with demands for justice: Dr Tahir-ul-Qadri

Country not to be defamed with demands for justice: Dr Tahir-ul-Qadri 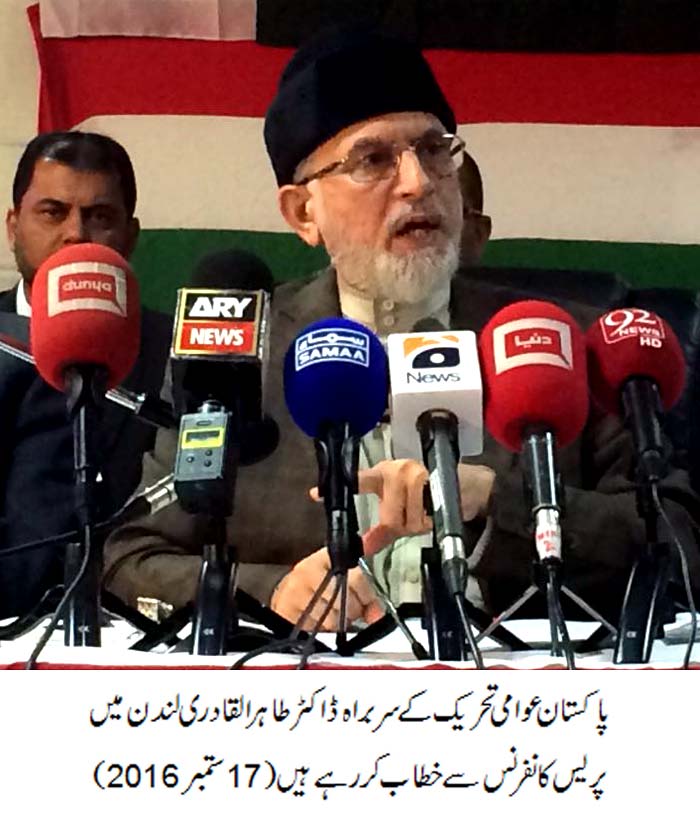 Addressing a press conference in London, PAT Chairman Dr Muhammad Tahir-ul-Qadri has said that the hands of Prime Minister Nawaz Sharif are bloodied with the killings of innocent people in Model Town. He said that the Prime Minister is directly involved in the Model Town carnage, asking with what face will he plead the case of the Kashmiris at the UN? He said that if the country did not earn a bad name with the Panama leaks, how will the demand for justice in the Model Town case bring it into disrepute? He clarified that we are knocking on the doors of the international institutions for justice against the government of Nawaz Sharif, not the state of Pakistan. He said that we have hired the services of international law firm to take up the Model Town case in the UN Human Rights Council, English High Court and International Criminal Court, adding that we would reveal the name of the firm at an appropriate time. He said that the families of the martyrs of Model Town tragedy have not got justice during the last two years and it is for this reason that we are having to resort to the international institutions. He said that even if he made an appeal of 10 Euro from every worker of PAT, the expenditure to be incurred on the case would be met. He vowed to fight for justice till the last breath of his life and never to surrender before the killers and oppressors.

Dr Tahir-ul-Qadri said that the Punjab Government has not given powers to the Rangers to date and they are making the terrorists and criminal flee before the powers are conferred on the para military force. He said that key accused and important characters of the Model Town case such as DIG Abdul Jabbar, SP Sulaiman, SP Abdur Raheem Sherazi, and SP Umar Riaz Cheema were given a leave of two years and made to flee abroad. He said that according to his information, these officers involved in the Model Town tragedy are preparing cases for political asylum here. He said that the Sharif brothers made them flee lest they should become approver. He said had the conscience of the Sharif brothers been clear, they would have released the report of the Model Town judicial commission without delay of a second. He said that we had to arrange a march to Islamabad to get even the FIR registered. He said that hundreds of thousands of people attended the rallies and protest demonstrations in 175 cities as part of the Qisas movement. He said that we are not getting justice because all institutions responsible for investigation and trial are in the hands of the rulers. He said that not even a single accused was arrested in the Model Town case, stating that Rana Sanaullah was temporarily removed from his position to throw dust in the eyes of the people and Dr Toquir Shah, the central character in the Model Town killings, was sent abroad as ambassador to WTO. He said that high positions were distributed as reward for killing people in the Model Town.

The PAT Chairman said that the judicial commission report noted clearly that the police did exactly what it was asked to do by the Punjab government. He reminded that the Chief Minister had said in his press conference that if the judicial commission even hinted at him, he would leave his position. He said that we would not budge even an inch from the demand of Qisas howsoever long he has to wait. He said that we have had to knock on the doors of the international forums after we were denied our fundamental right of justice.

Responding to various questions regarding attacks on the national security, Dr Tahir-ul-Qadri said that the PM could not fight the case of the Indian RAW agent Kulbhushan in Pakistan and many Kulbhushans work in his mills. He said that 10-year visa was granted to an Indian Sri Dar on the recommendation of Ramzan Sugar Mill, whereas the fact remains that there is no agreement between both countries under which such visa of such a long duration could be issued. He said that he mentioned in his press conference in Pakistan about 300 Indians working in the sugar mills of the rulers and released the list of the names of 50 of them which has not been rejected to date. He said that the rule of Sharif brothers is dangerous for the country. He said that it is also a question for him as well as to why the relevant institutions remain silent.

In reply to a question, the PAT Chairman said that nucleus of the Islamic system is justice and our struggle is for the sake of justice. He vowed to continue the struggle for justice till the last breath of his life. Basharat Jaspal, Fayyaz Warraich, Dr Raheeq Abbasi, Ali Aziz Bukhari, Sajid Mahmood and others were present on the occasion.