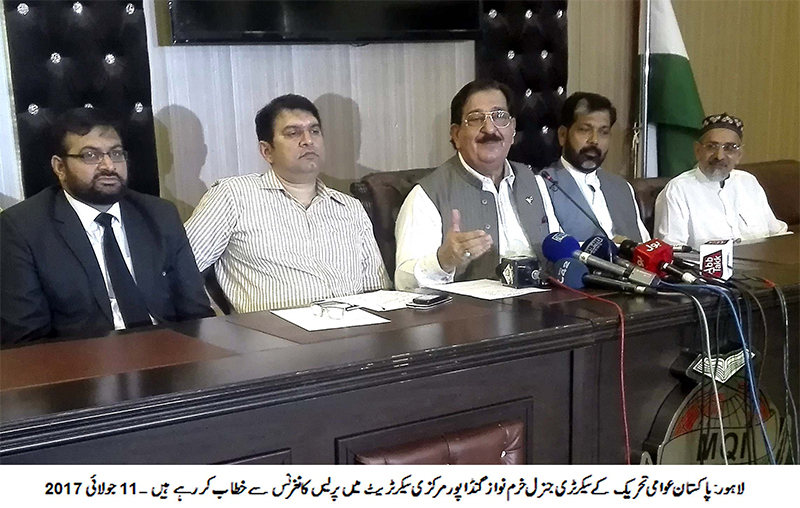 The central Core Committee of Pakistan Awami Tehreek has announced to hold a protest demonstration from the Punjab Assembly to the Chief Minister’s Secretariat on July 15 (Saturday). The purpose of the rally is to demand inclusion of the Sharif brothers, Rana Sanaullah and others in the investigation and announce the next course of political action.

Briefing the media about the upcoming event, PAT Secretary General Khurram Nawaz Gandapur said that all political parties will be invited to attend the demonstration. He revealed that three ministers made an offer of money for reconciliation of the Model Town case, adding that these rulers have a habit of making monetary offers to everyone. He said that if the rulers negate him, he will publicly mention the names of the ministers. He said that the way Rana Sanaullah targets the army in his media talks, only a RAW or Mossad agent can do so.

Khurram Nawaz Gandapur said that blood of innocent people was shed on June 17, 2014 on the orders of the rulers and its biggest proof is the lack of publication of the Justice Baqir Najfi Commission report despite passage of three years. He said that the report has names and addresses of the perpetrators, noting that it has been three years since we have been in the court of law to get a copy of the judicial inquiry. He said that children and family members of the martyrs ask for what crime have their loved ones been killed and why they have not been given justice after three years.

Khurram Nawaz Gandapur said that it is formal demand of the PAT that the Prime Minister tenders resignation from his position after the damning JIT revelations and faces the charges that have been framed against him. He said that the whole ruling family has proven to be a thief which was busy looting the nation for 35 years and now the proofs of the plunder have come to the fore. He said that the rulers will not leave out of their free will and in these circumstances, it is the responsibility of the political parties, lawyers, civil society and democratic forces to take to the streets to push them out.

The PAT Secretary General said that all the statements that Dr Tahir-ul-Qadri made during the sit-in of 2014 regarding the rulers have been proven to be right. He said that the list of crimes committed by the ruling family is so long that they need to be held accountable for each of their action. He said that the people of Pakistan need to make sure that no corrupt and exploitative forces are allowed to rule the country in future.

In reply to a question, Khurram Nawaz Gandapur said that it was in the light of fate of commissions and JITs that the PAT Chairman commented on the outcome of the Panama JIT. He said that Justice Baqar Najafi Commission, Quetta Commission and News leaks are the latest example in this regard. He said that it is to be seen when the ruling family is banished from power in the light of the recommendations of the report of the JIT.

PAT Secretary General said that Dr Tahir-ul-Qadri is on tour of Egypt as per the plan. He said that we are keeping a close eye on the developing political situation and if considered necessary, he will reach Pakistan in 12 hours. He made it clear that the Core Committee will decide about the return of the PAT Chairman. He said that Dr Qadri will announce the next course of action in the political demonstration on Saturday. 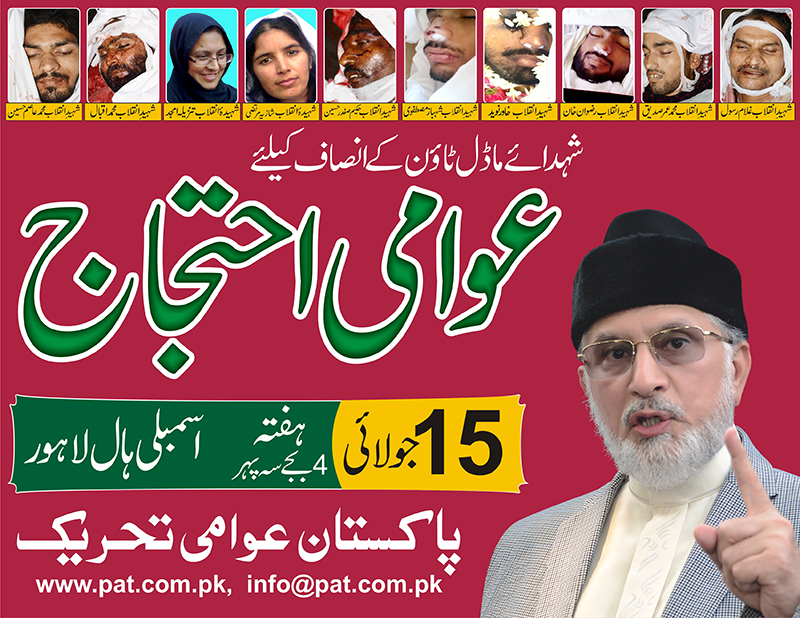