If you are innocent in MT tragedy, why do you fear? Why have you kept Justice Najfi Commission report under wrap? #Justice4ModelTownMassacre

Addressing a huge public gathering at the Nasir Bagh in Lahore, PAT Chairman Dr Muhammad Tahir-ul-Qadri has said that a dishonest and disqualified person asks as to what is his fault. He said that his question to this man is that what crime had the fourteen innocent people committed who were killed in cold-blood on June 17, 2014 in broad day-light. He said that it is up to Nawaz Sharif to know about his fault but according to his understanding, it is Allah’s way of holding the former premier accountable for shedding blood of innocent people in Model Town. He said that the workers have authorized him to stage a sit-in, adding that the sit-in set to take place now will be the last and final one. He said that Nawaz Sharif and his party should rule hearts but they should get rid of Pakistan now.

Dr Tahir-ul-Qadri said that those who taunted opposition of obstructing the CPEC are out on the roads now. He asked how this project will be completed now. He said that the people against whom we staged sit-ins were known to all and sundry but asked Nawaz Sharif in the same breath to tell the nation against who he is taking out a rally. He said that at times the former premier says ‘they’ hatched a conspiracy and at times cautions the ‘conspirators’ about this and that. If he has the courage, he should name the names of those the ex-premier believes are conspiring against him. He added that in case of his failure to prove the identity of the ‘conspirators’, we will think that a dishonest person has declared a war on the state of Pakistan. He said, “Nawaz Sharif, you have got a certificate of dishonesty. If you had had a bit of honour left, you would have restricted yourself to your home instead of enacting a drama on the GT Road.”

The PAT Chairman demanded that Justice Baqir Najfi Commission report should be made public and the investigation of the Model Town tragedy should be handed over to the Panama JIT. He said that only that person has become the Prime Minister who was nominated by the disqualified Prime Minister. He said that the PML-N has a government in Punjab and the former premier has the mandate even today and hence he should clarify who did not respect his mandate. He said that it appears that the party of the GT Road will be buried in the GT Road.

Earlier Dr Tahir-ul-Qadri reached Lahore at 8.15 am from Oslo. Thousands of the PAT workers rolled out a red-carpet welcome for their beloved leader at the Lahore Airport. He spoke to the workers and media after coming out of the airport. Later on, he reached Nasir Bagh from the Lahore Airport in the form of a rally. The workers warmly welcomed their leader at different places. They danced to the tune of the drumbeat and freed pigeons as a mark of happiness. Rose petals were showered on Dr Tahir-ul-Qadri at different locations. A large number of women were also part of the gathering.

Dr Tahir-ul-Qadri asked the Punjab Chief Minister to resign from his position in view of his role in the Model Town tragedy. He said that the Supreme Court showed leniency towards the former PM, noting that he could be sent to jail for seven years for submitting fake and forged documents in the apex court. He said that the banners praising ‘virtues of truthfulness and trustworthiness’ of the ousted Premier have been hung up at The Mall in Lahore. He said that the reality is that the name of Nawaz Sharif has acquired a form of abuse. He asked Nawaz Sharif to rule those hearts that legitimize corruption and consider it their birthright, but beseeched him to get rid of the people of Pakistan.

The PAT Chairman said that those who fired live bullets at 100 people did not allow the registration of FIR, and constitution of a neutral JIT. He said that out of 124 people nominated in the FIR lodged by MQI, not even a single accused was allowed to be arrested. He said that they even did not go through the ritual of applying for a bail, adding that the masterminds who ordered the Model Town tragedy were not even summoned. He said that we would not bear perpetuation of more oppression on this count.

Addressing the protest rally, Sheikh Rashid Ahmad said that Nawaz Sharif has been afflicted by the curse of 14 martyrs. He said that Nawaz Sharif is trying to get an NRO from the military in the form of the protest rally, adding that he will not be able to run away now. He said that Shahid Khaqan Abbasi took commission in the LNG project, stating that they are partners in corruption and he will expose the current PM as well. He said that Justice Najfi Commission report should be released and justice should be done for the 14 martyrs of Model Town.

Senior PTI leader Shah Mahmood Qureshi, while addressing the demonstration, said that we were with PAT and Dr Qadri on the Model Town tragedy yesterday; we are with them today and will continue to do so tomorrow as well. He said that it is our demand that the report of Justice Najfi should be made public. He paid rich tributes to the PAT workers and dubbed them as courageous and committed.

Former Governor of Punjab and senior PTI leader Chaudhry Muhammad Sarwar recounted the services of Dr Tahir-ul-Qadri in his speech. He said that after 9/11, the Muslims were accused of terrorism and extremism in Europe and it was Dr Tahir-ul-Qadri who employed reasoning and logic to explain Islam’s position and thus washed the blot of terrorism and militancy from the face of the Muslims. He said that the PAT Chairman projected soft image of Islam and fought a war against extremism in the whole world. He said that terrorism with the PAT workers is unacceptable and demanded that justice should be administered in Model Town case.

Chaudhry Zaheer-ud-Din Ahmad, PML-Q Secretary General, said on the occasion that he has come to the protest rally to express his party’s support for the martyrs of Model Town. He said that the leadership of his party has been consistent in their support to PAT on the Model Town case. He also demanded the release of the Model Town Commission report.

Sahibzada Hamid Raza also spoke to the participants of the rally and said that the subordinate agencies of the Punjab government have been threatening to kill them. He dared the government arrest them, saying that they are not cowards like the Sharifs who will be so scared of imprisonment that they will flee to Saudi Arabia by cutting a deal with General Mushrraf. He said that the thieves of Panama will now be held accountable for their role in the Model Town massacre. He said that we stand shoulder to shoulder with the PAT and its leadership and will jointly bring the culprits to book.

Abdul Khaliq Rizvi, leader of Majlis Wahdat-ul-Mulsimeen also expressed his party’s solidarity with the martyrs of Model Town and said that we will continue to support it in its struggle of justice. He said that the Sharifs will not be able to push the issue of fourteen killings under the carpet. He said that the killing of one person is akin to the killing of the whole humanity, stating that the Sharifs killed fourteen innocent PAT workers for no reason and they will have to answer for that. 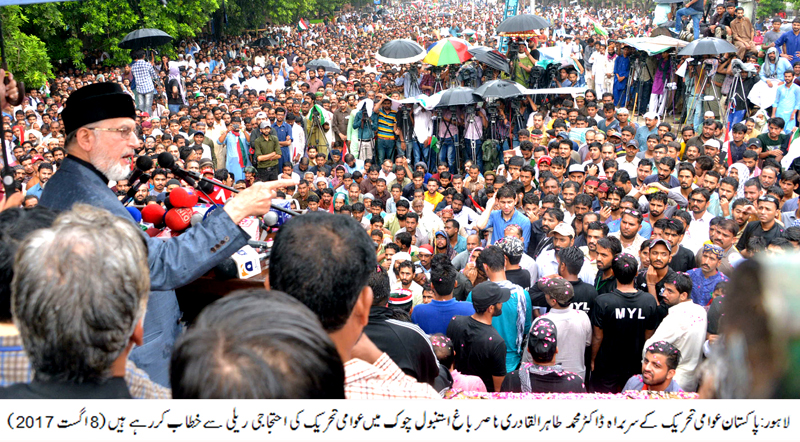 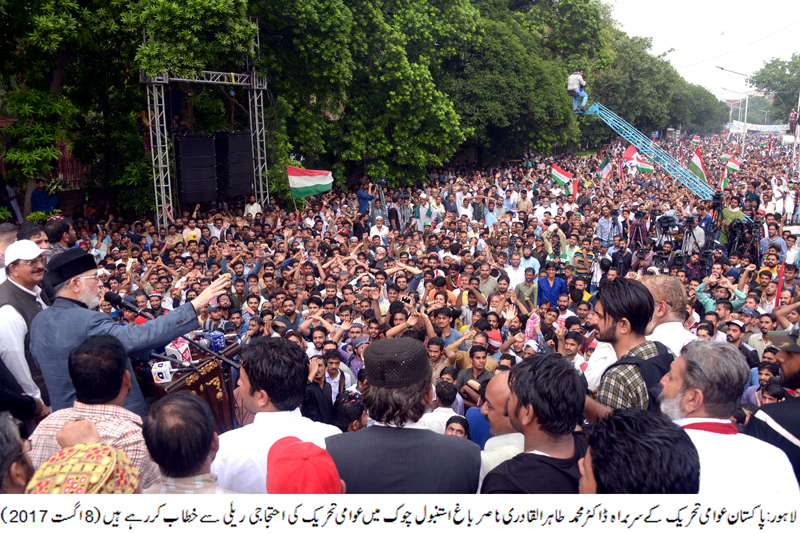