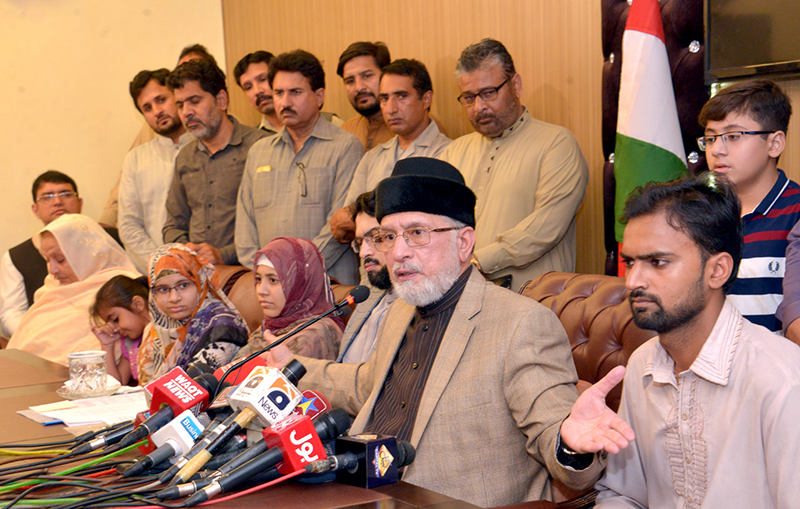 Addressing an emergency press conference soon after the Lahore High Court’s judgment to make the Baqir Najfi Commission report public, PAT Chairman Dr Muhammad Tahir-ul-Qadri asked the Punjab Chief Minister to hand over the report to the families of the martyrs before being apprehended. He said that we would spend all resources for justice, adding that we would die of hunger but would continue to chase the perpetrators of the Model Town tragedy. He said that the Sharif family is faced with the Divine wrath and is on the run. He said that it is our demand that all those nominated by PAT in the FIR and the private complaint should be placed on the Exit Control List. He said that if the rulers of Punjab file an appeal against the LHC verdict, we will hire the services of the best lawyers, stating no tactic of the so-called ‘Khadim-e-Ala’ would work for him nor would any ‘dialogue’ that he has a wont to uttering. The report is bound to see the light of day, come what may.

The family members of the martyrs of Model Town tragedy, Dr Hassan Mohi-ud-Din Qadri and the senior leaders of the party were present on the occasion. At the start of the press conference, Dr Qadri showed a clip of the Punjab Chief Minister’s presser on June 17, 2014 in which he had stated that if the judicial commission raised its finger at him either directly or indirectly, he would vacate his position within no time and put himself at the mercy of law.

Pakistan's worst massacre was perpetrated in #ModelTown on orders of Shehbaz Sharif.

Dr Qadri said that if the Punjab CM has the courage, he should fulfill his promises by handing over the copy of the report to the family members of the martyrs of Model Town. He said that the report is on the table of the Chief Minister and he is leaving for the UK and one does not know whether he would be coming back or his going there is temporary in nature. He said that he had stated publicly that the land of Pakistan will be shut on Nawaz Sharif and he would not get enough for his final abode, noting that today the whole family is rudderless.

The PAT leader said that Justice Sayyid Mazahir Ali Akbar Naqvi gave a courageous judgment. He said that we always respected judiciary, stating that the LHC judgment is a milestone in upholding the banner of justice in the country. He also paid tributes to Pakistan media for giving voice to the poor families of the martyrs and upholding the banner of truth on the occasion. He said that we faced every brutality but prayed to the courts to administer justice. We never took law in our hands. He said that the worst ever character assassination of the party leadership and the workers was committed and the basest of the allegations were made but at the end of the day, we have succeeded and the killers continue to hid their faces. He said that the tears of the families of martyrs of Model Town and our legal struggle have borne fruit. He said that it is just beginning of the process of dispensation of justice, adding that there will surely be its culmination as well.

Dr Tahir-ul-Qadri said that research institutes need 50 years to determine the low and depraved levels to which the Sharif brothers can stoop. He said that Model Town remained a theatre of war for 12 hours; the beasts wearing the police uniform sprayed bullets on the innocent people; they did not even spare the pregnant women and not even a single killer has been put behind the bars or punished to date. He said that the Sharif brothers sent those police officers abroad on foreign postings who ordered the killing of the innocents. He said that our workers who were sleeping at night were woken up and shot to death. He said that we had just expressed the intention of political movement; no protest had back then been organized. He said had they been political minded, they would have dealt with us politically. He said that the killers of the innocent people will be deprived of peace of mind. They would not be able to sleep without taking pills because the blood of the people will continue to haunt them.

The PAT leader said that they did not have a damn idea that they will be kicked out in this way; they will be out on the roads asking as to why they were expelled from power. He asked Shahbaz Sharif whether he would go into appeal against the oppressed. He said it looks Pakistan has been headed on the right path. He said that the poor and hapless people for whom Pakistan was created are in great anguish and their sacrifices are bearing fruit now. He said that the courts are dispensing justice and we are completely satisfied. He said that protest is our right but we do not need to resort to it for the time being.

Dr Qadri asked the Sharif brothers to submit themselves to law, for without doing so they would neither get peace in this world nor in the hereafter. He said that the first thing a killer will be asked  will be about killing on the Day of Judgment and on being found guilty, he will be consigned to hell. He said that Ishaq Dar is not being allowed to come to Pakistan lest he should become an approver.