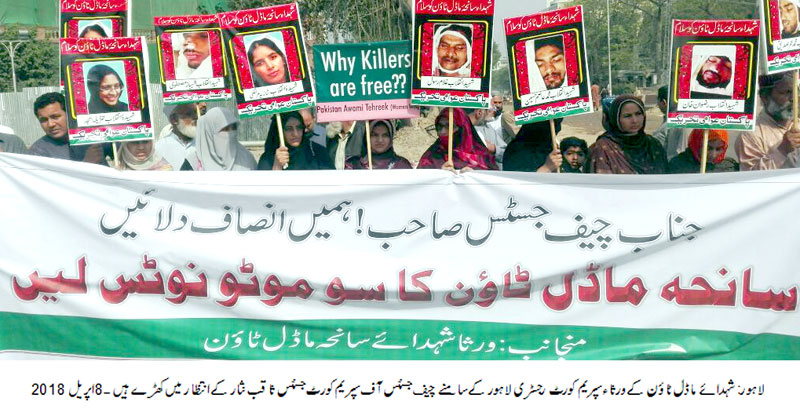 Bisma Amjad, the daughter of Shaheed Tanzila Amjad who was among those martyred in the Model Town massacre, called on the Chief Justice of Pakistan in the Supreme Court Registry Lahore and prayed to him to take suo motu notice of the Model Town incident over the non-provision of justice despite the passage of four years. The Chief Justice expressed his concern on the delay in dispensation of justice and ordered the Advocate General Punjab to submit a detailed report in this regard.

Naeem-ud-Din Chaudhry Advocate and Noorullah Siddiqi also accompanied Bisma Ajmad during her meeting with the Chief Justice. The family members of the martyrs of the Model Town tragedy were stood before the Lahore Registry since 8 am yesterday, holding the placards with slogans for seeking justice written on them. When the Chief Justice’s caravan passed by the family members of the martyrs, the speed of his car slowed down and he had a look at the placards and then summoned three representatives to meet him in his chambers. Upon this, Bisma Amjad, Naeem-ud-Din Chaudhry Advocate and Noorullah Siddiqi reached the chamber to meet the Chief Justice of Pakistan.

After the meeting, Bisma Amjad, Noorullah Siddiqi and Naeem-ud-Din Chaudhry Advocate spoke to the media. Bisma Ajmad said on the occasion that the Chief Justice of Pakistan listened to her with complete affection and assured her of the fact that justice will be administered and that no one is above the law. She said that the honorable CJ has taken notice of the delay in dispensation of justice for which she is thankful to him.

Naeem-ud-Din Chaudhry, while talking to the media, said that the Chief Justice listened to our point of view and stated in clear terms that provision of justice according to law is the responsibility of the trial court and that no one can influence the process of justice. He said that justice will be done and there is no need to fear anyone as no one can harass. He said that he is issuing a notice to know about the reasons of delay. He said that it is the responsibility of the trial court to provide justice according to the law.

Naeem-ud-Din Chaudhry Advocate said that we told the Chief Justice that the former Prime Minister, Chief Minister, Law Minister and their accomplices are involved in the Model Town tragedy. Model Town incident did not happen accidently. Rather it is an outcome of well-thought-out strategy. He said that those who are not letting justice be done is a matter of the record. He said that the rulers are influencing the process of justice. He said that the Punjab government carried out an illegal operation to remove barriers that were placed lawfully. 100 people were fired at, out of which 14 were martyred. He said that the Najfi report held that the police did what it was exactly ordered to do.

PAT Spokesperson Noorullah Siddiqi told the media that we brought it into knowledge of the Chief Justice that the Punjab government tried to murder justice at every stage starting from the investigation because it is directly involved in the tragedy. He said that the report compiled by the JIT set up by the Punjab government contained two dissenting notes of the agencies which were made to disappear by the government. He said that the Chief Justice was informed that even the accused have not been indicted so far and the powerful accused are delaying the process of indictment through usual tactics and submission of applications on applications.

According to the PAT Spokesperson, the Chief Justice said that provision of justice according to the law is the responsibility of the anti-terrorism court and we would make sure that nothing contrary to the law takes place.

In a conversation with the Chief Justice, Bisma Amjad said that he is the top judge of the land and all of their expectations for justice are associated with his office. She said that only she and her siblings know how they are living without their mother. She asked that we should be told as to what was the crime of her mother and aunty for which they were killed in cold blood. During the dialogue, the Chief Justice placed his hand on the head of Bisma Amjad and advised her to fulfill the dream of her mother through acquisition of knowledge. He asked her to focus wholly on her education, stating that the provision of justice is our responsibility and IA the same will be dispensed according to the law.