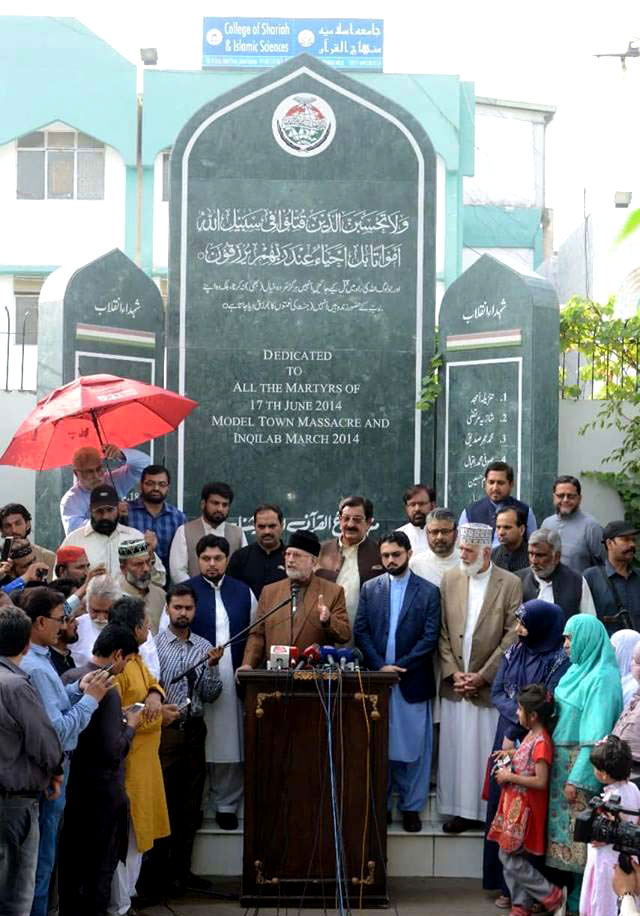 Talking to the media on the fourth anniversary of the Model Town tragedy, Dr Muhammad Tahir-ul-Qadri has said that those of the police officers who have been summoned by the anti-terrorism court as the principal accused should be made to step down from their positions till the conclusion of the trial and announcement of the decision. He said that they are using their official positions for personal benefit and according to Article 10-A of the Constitution, their stepping down from their respective offices is necessary to fulfill the demands of a fair trial. He said that in addition to presiding over transparent elections, provision of justice to the oppressed is also the responsibility of the caretaker government.

The ceremony in the memory of the martyrs of Model Town tragedy took place on June 17 which was attended by workers, families of martyrs and the injured and the people belonging to various walks of life.

Dr Tahir-ul-Qadri said that our whole attention is focused on the legal fight for justice in the Model Town case. He said that a bench of the honorable Lahore High Court is hearing the petition to summon Nawaz Sharif, Shahbaz Sharif and other former Ministers. He said that our killers are the Sharif brothers and with their appearance in the anti-terrorism court, the process of justice will be accelerated. He said that no one ever asked the Sharif brothers about the Model Town killings even once during the last four years, adding that the fact is that we have already presented undeniable proofs of their involvement in the court of law and the unbiased and independent media has already placed the proofs of their being perpetrators of the tragedy before the nation.

The PAT Chairman said that the bloodshed that continued for 12 hours could not be a mere coincident. He said that the events taking place before, on and after the day of tragedy are enough to prove that the massacre took place with the full backing and will of the Sharif brothers. He said that no inquiry was conducted against the police officers, not even for the sake of form. The officers involved in the police action were not only promoted but also posted to prized positions and some of them were sent abroad. He asked if it is not the proof of the fact that the killers have been safeguarded and rewarded for shedding blood of innocent citizens, what else it. He said that those who rewarded them for their oppression were none other than the former prime minister and the chief minister.

Dr Qadri said that we fought a battle for justice for four years and during this period, the oppressive mafia was neither able to intimidate us nor make us budge from our stand. He said that if the Model Town case is being heard today, the credit for it goes to the families of the martyrs for their steadfastness. He said that he did not let this be swept under the carpet, and followed the developments very closely. He said that he employed a wise legal strategy to keep the case alive, stating that the whole world is a witness that we did not let the sacred blood of our workers go in vain. He said that we faced every kind of character assassination and abuses but it did not make us waver in our resolve. He said that complete justice will be done now and the law will have to distinguish between the oppressor and the oppressed.

In reply to a question, the PAT Chairman said that our struggle against this oppressive system spans three decades. He said that we are of the considered view that this system generates corruption and protects the corrupt and nothing will change unless it is changed. He said that the façade of changing the system with the change in the faces should be stopped now. He said that corrupt police, bureaucrats and other government departments are the ugly face of this system. He said that the people would not be able to get rid of the system without reforms and reconstruction of the institutions.

The PAT Chairman offered Eid prayers in central Minhaj-ul-Quran Mosque and exchanged Eid greetings with the workers. Afterwards, he had a breakfast with the workers from Sindh, KP and Balochistan who were part of Itikaf. On the following day of Eid, he went to Jhang City where he offered Fateha at the grave of his father and met with the local notables. They also hosted a lunch in his honour.