Time for PTI government to honour its pledge for provision of justice: Dr Tahir-ul-Qadri

Time for PTI government to honour its pledge for provision of justice: Dr Tahir-ul-Qadri 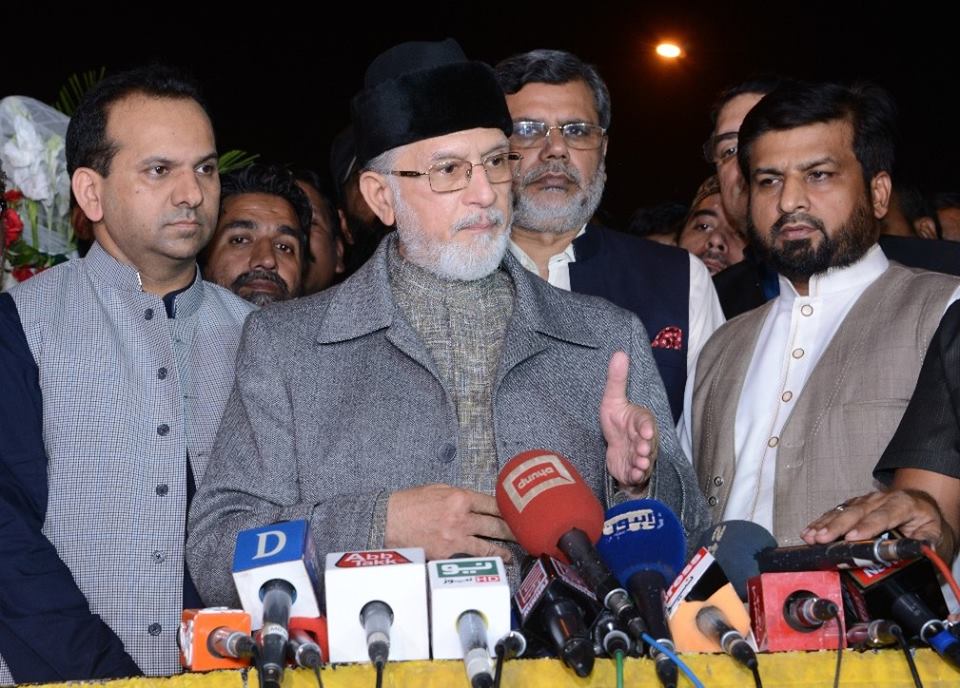 PAT Chairman has said that the questions raised by the Islamabad High Court about the legal role of the NAB while deciding on the suspension of punishment awarded to Nawaz Sharif, NAB is duty bound to answer them. He asked as to who is responsible for the lapse and negligence in investigation and prosecution, stating that the NAB Chairman should take action against those responsible for this.

The PAT Chairman expressed these views while talking to the senior leaders of the party yesterday. He said that the system and bureaucracy remains the same, how can one expect a different result. He said that the games being played for last seven decades will continue to be played in the future too. He said that unless the system changes for the better, the slide will be unstoppable and justice will not be served.

Meanwhile while talking to journalists at the Allama Iqbal International Airport, Dr Tahir-ul-Qadri said that Model Town tragedy remains a blot on the face of the Pakistani state. He said that innocent citizens were mercilessly butchered on the 14th of June including the women. Around 100 people were shot at and the worst reign of torture was unleashed on the hapless citizens. He said that the family members of the martyrs have been going from pillar to post for just for last four years.

Dr Tahir-ul-Qadri said that PTI Chairman Imran Khan has been standing by the bereaved families from the days of sit-in to date and has always raised voice for justice. He said that Imran Khan holds the highest executive position in the country and his first test for the PTI government is to make 116 police officials step down from their positions who were involved in the Model Town tragedy. He said that Imran Khan has been consistently demanding the removal of these police officials along with the PAT so that they cannot influence the process of investigation. He said that all those police officers still continue to hold on to their positions; none of them has either been suspended or made OSD or sent to jail.

The PAT Chairman said that it is responsibility of the current government to honour its public commitments. He hoped that Imran Khan will abide by his promises. He said that the masterminds and the police officers involved in the Model Town tragedy should be sent to jails so that the road to justice should be paved. He said that perpetrators of Model Town tragedy are hurling threats. The witnesses are being slapped in the court of law and owing to intimidation and threats, our leading lawyers have refused to further plead the case. He said that he has had to come to Pakistan immediately so that a leading lawyer could be hired. He said that we had filed an appeal in the Lahore High Court. The arguments have been concluded and the decision has been reserved for last two and half moths. It is our demand that the decision may be announced.

In reply to a question, Dr Tahir-ul-Qadri said that MQI has played an important role in stopping the caricature contest from being held. He said that the MQI signed a memorandum with the members of Parliament belonging to Germany, Holland and other countries who have been co-participants with Dr Qadri in various conferences. The memorandum was sent to the Prime Minister of Holland who constituted a committee to look into the matter. He promised that whatever be the recommendations of the committee, the decision will be taken accordingly. The committee recommended that the contest should not be allowed to be held. He said that he has already expressed his condolences for Begum Kulsoom Nawaz and prays for the departed soul to rest in peace.