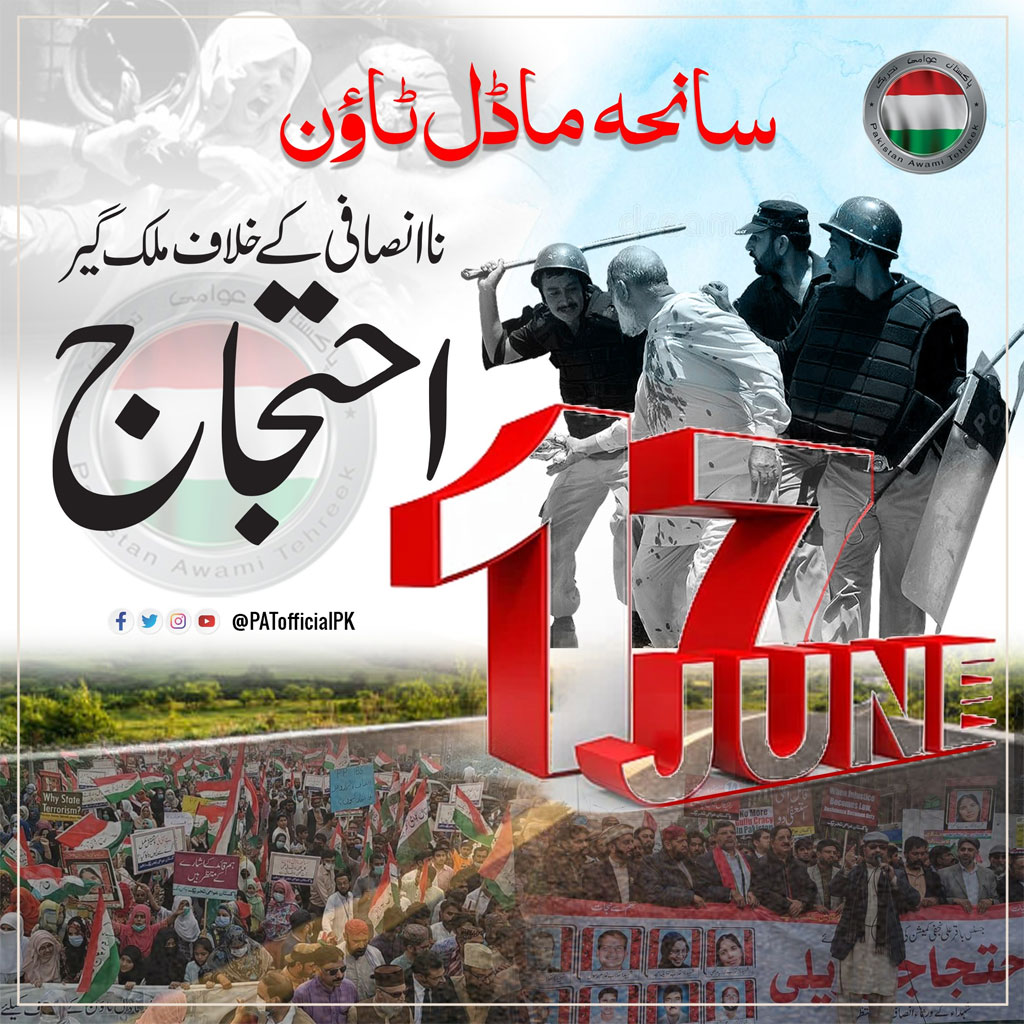 Pakistan Awami Tehreek (PAT) has decided to hold protests across the country at the district level on the 17th of June in remembrance of the martyrs of Model Town tragedy. PAT Secretary General Khurram Nawaz Gandapur has written a letter to all district organizations in this regard in which the directions have been given to the local chapters to hold protests against injustice on the occasion of the completion of 8 years of the Model Town massacre. All district organizations have been directed to arrange protests in front of district press clubs.

Khurram Nawaz Gandapur said that the JIT, which was established on the court order, should be allowed to complete its work. He said that on June 17, 2014, a heinous Model Town tragedy took place when the MQI Secretariat was attacked by police on the orders of the then government. Innocent workers were short at. The worst kind of violence was perpetrated on the elderly, women and children and as a result of police brutality, 14 innocent citizens were martyred in front of the cameras of national media. More than 80 people sustained serious injuries as a result of brutal police firing. The martyrs also included Tanzeela Amjad and Shazia Murtaza.

The MQI Secretary General said that there is only one demand of the family members of the martyrs that impartial investigation into the Model Town tragedy should be conducted. He said that MQI patron-in-chief and founding leader Dr Muhammad Tahir-ul-Qadri appeared before the larger bench of Supreme Court in December 2018 and pleaded for the constitution of an impartial JIT. The apex court accepted the demand and consequently the notification of new JIT was issued on January 3, 2019 and afterwards the JIT started its work. He said that it was for the first time that important evidence and documented proof came on record. He said it was also for the first time that the JIT recorded the statements of eye-witnesses and the injured as well as those of the accused. He said that the JIT concluded its work in two and a half months.

Khurram Nawaz Gandapur said that when the stage of compiling the report came, the Lahore High Court suspended the notification of the JIT on March 22, 2019 on the petition of an accused police official and issued a stay order that still remains in force. He said that the legal process of investigation is suspended because of the stay order. He said that the family members of the martyrs petitioned the LHC against the stay order, which still remains pending for the last three years and two months. He said that we have taken our matter before the honourable Supreme Court many a time, adding that the apex court directed the Lahore High Court to conclude the Model Town tragedy case within 3 months on priority. He, however, added in the same breath that it has been more than 2 years and 2 months that the appeal of the family members of the martyrs has not yet been disposed of despite a very clear direction of the Supreme Court.

Khurram Nawaz Gandapur said that the provision of justice to the aggrieved is the responsibility of the state and its institutions. He said that our search for justice remains elusive, adding that the JIT completed its work but was not allowed to compile the report. He said that the Supreme Court accepted the demand of MQI on December 5, 2018 and ordered the constitution of the JIT. It asked Dr Muhammad Tahir-u- Qadri that since his major demand of the establishment of a new JIT had been accepted, therefore he should focus his attention on the legal proceedings instead of the protest.

Khurram Nawaz Gandapur said that we have been following the legal process since then; however, the dream of justice continues to remain a pipedream. He said that it is our request to the honorable judiciary, lawyers, media, human rights organizations and civil society that they should play their role in the provision of justice to the aggrieved families of the martyrs of Model Town tragedy.